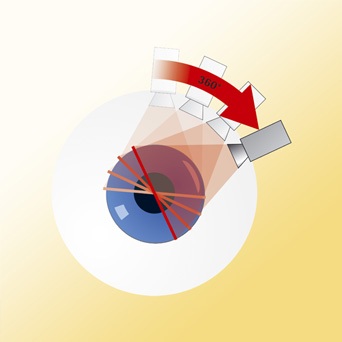 The OCULUS Pentacam is a combined device consisting of a slit illumination system and a Scheimpflug camera which rotates around the eye.

A thin layer within the eye is illuminated through the slit. Being not entirely transparent the cells scatter the slit light. In doing so they create a sectional image which is then photographed in side view by a camera. This camera is oriented according to the Scheimpflug principle, thus creating an image of the illuminated plane which appears completely sharp from the anterior surface of the cornea right up to the posterior surface of the crystalline lens. Swivelling around the eye, the slit-camera device generates a series of radially oriented images of the anterior eye chamber. In the subsequent analysis of the sectional images, tissue boundaries are detected and point clouds are assigned to the various tissue layers (anterior and posterior corneal surfaces, iris, crystalline lens).

The sectional images are saved, corrected in relation to a common reference point and then put together to create a three-dimensional model of the entire anterior eye chamber. This makes it possible to generate reproducible tomographic images of the anterior eye chamber in any desired plane.

After correction for Scheimpflug distortion and light refraction at tissue interfaces the exact of the location of image edge points in the eye is determined by means of ray tracing. Eye movements during image acquisition are captured by a second camera (pupil camera) and also taken into account in the mathematical evaluation. This produces a set of three-dimensional measurement data which gives a precise geometric description of the anterior eye segment. This data in turn can be used to generate data on elevation, curvature, pachymetry, depth of the anterior eye chamber…etc. in the well-known form of colour maps. 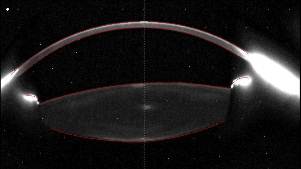 Differences in brightness between individual layers provide an indication of any opacity, since transparent layers result in less slight scattering. This information can be used to assess cataracts.

The OCULUS Pentacam is the only instrument on the market able to perform a precise and complete measurement and analysis of the centre of the cornea. The rotating measurement principle avoids measurement errors that would result from horizontal scanning. Due to the radial orientation of the sectional images the density of data points is greatest at the centre.

This contact-free, hygienic measurement process takes less than two seconds. This is the time it takes to generate 50 sectional images yielding in turn 138,000 true elevation values.